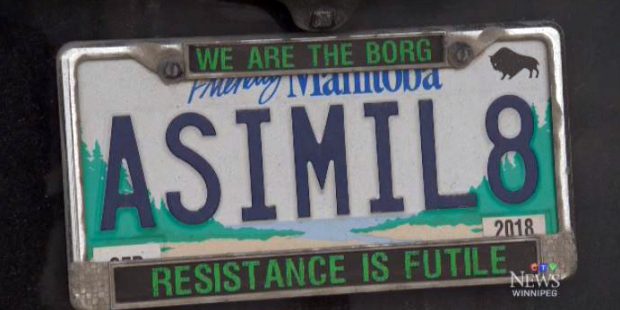 Canadians love to express themselves, but some license plates are just too rude for the road.

Manitoba’s Public Insurance (MPI) company revoked a Star Trek fan’s custom license plate after receiving complaints that it was offensive. The license plate read “ASIMIL8” and was a nod to The Borg species in Star Trek. Even if the license plate had good intentions, it is property of the Crown and not that of the individual, so it can be revoked if there is good reason.

A few others from MPI’s ongoing list of rejected plates include:

HOLYCOW – considered to fall under the religious slogan category

CHRDNAY – rejected because it is alcohol-related

These plates are not exclusive to Manitoba though, as there have been similar instances in provinces across Canada. Provincial insurance corporations are tasked with the job of searching through applications for personalized license plates. The applicant first must give the intended meaning behind their plate and then it is reviewed by a registry agent, followed by a small committee.

In Alberta, they receive around 7000 requests for personalized license plates every year, just over 100 of those are denied on average. You might be wondering under what circumstances a license plate might be rejected? Service Alberta agents have seven categories for the rejected plates that they can fall under: racial and religious remarks, foul language, political and social sensitivities, inappropriate phrases and others that refer to alcohol and illegal activities (Source: CBC Edmonton). Plates that do not follow the proper procedures required to insure a custom license plate can be revoked, documented, and will not be issued to another driver.

READ MORE: What Vehicle Modifications are Illegal in Alberta?

Vehicle Flood Damage: How to assess it and spot it on used cars
June 24, 2020

Will Online Auto Insurance Threaten Broker and Agent Jobs?
May 3, 2019